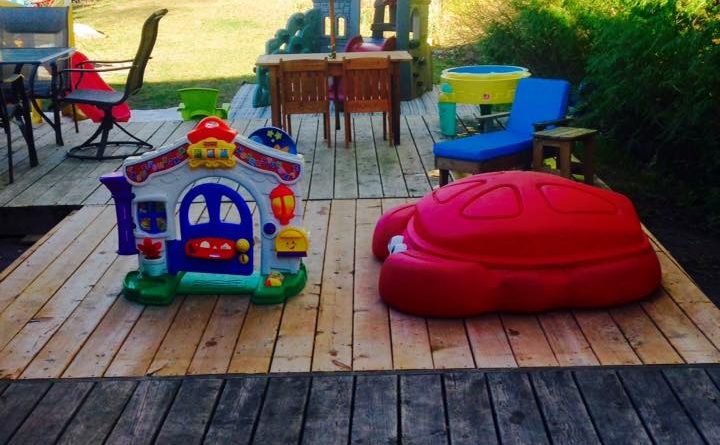 I am sure most people would love to have a deck on their property, however they are pretty pricey whether you build it yourself or worse yet… You hire a contractor to build one for you.

Well if your lucky enough to live in Cottage Country or close to a seasonal trailer park or better yet many trailer parks you may be able to get one for cheap with very little work.

Thankfully for myself I live in Cottage Country in a small beach community in Southwestern Ontario Canada. Within a 10km Radius there are likely 10+ seasonal trailer parks so it wasn’t hard to find a deck for free or next to nothing.

The camping season around here usually starts May 1st and goes until Oct 31st, now this is important since during that span it is highly unlikely they will have a deck for you since usually the decks they needed to get rid of have already been sold, moved or destroyed.

However if you were to give them a call during the off season you may just be in luck, you see most campgrounds like to provide a clean slate/lot for their seasonal campers so they can customize it as they wish. So having a deck, shed or similar left on the lot is usually not ideal for them. So they want to try to get it off the lot as soon as possible, and usually very cheap or sometimes even free!

As stated earlier I live in a small beach community, I have 3 kids 2 of which are 4 or under… So as you can imagine during the seasonal months when they are in and out of the house there is alot of sand and dirt that ends up trucked into the house.. So in early spring we started to look into what will it take to get a deck built.. Called up some contractors and yeah it was going to cost several thousand to get one built, even looked into buying the materials new myself to build one and even that was a couple thousand not including the labor and time it would take me to build it.

I then had the idea to call around the trailer parks and see if any of them had any decks available, I just did the immediate ones within the little community here and sure enough the trailer park just down the road from me had 4 decks to choose from all at varying prices, so I scheduled to go have a look that weekend and found a perfect deck that was in great shape and even had a newer extension added onto it. After a bit of back and fourth we settled on a low price of $200 so long as I can take it away by the next weekend. So I get a trailer and enlist one of my friends to help me tear down the deck the following weekend, now here is one of the best parts of the whole situation. The trailer parks usually make it mandatory for decks to be built in sections so it is easier to take down and move around at a later date if need be. So here we are simply unscrewing and removing one board which is the connector board and then a couple of leg bolts for each section and it was finished and loaded.

We had it all loaded up and the trailer park manager stated that we could have the shed with a deck floor as well since he was going to destroy it anyways. So we said we would definitely take that and off we went to go put it back together in the backyard. 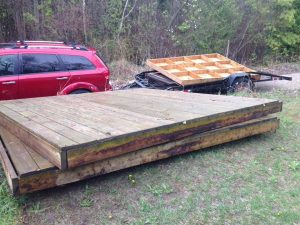 Thankfully we have a driveway that goes straight into the back of the property and is right next to the raised backyard area in which we plan on placing this deck. It sure did help with unloading and placing the sections. The deck even came with the concrete deck foundation blocks as well as some stairs that we did not used but stored for use on any future projects down the road.

After a couple of hours moving the sections around to where we like and a bit of digging to get it all leveled we ended up screwing everything together and in under half a day and $200 we ended up tearing down, moving, leveling and setting back up a 20x10ft + a 10x8ft extension deck for just $200 and some labor no additional materials were needed other than a bit of screws.

So far we are very happy with the deck, however we do have a few ideas to improve it and “finish” it off, so stay tuned! 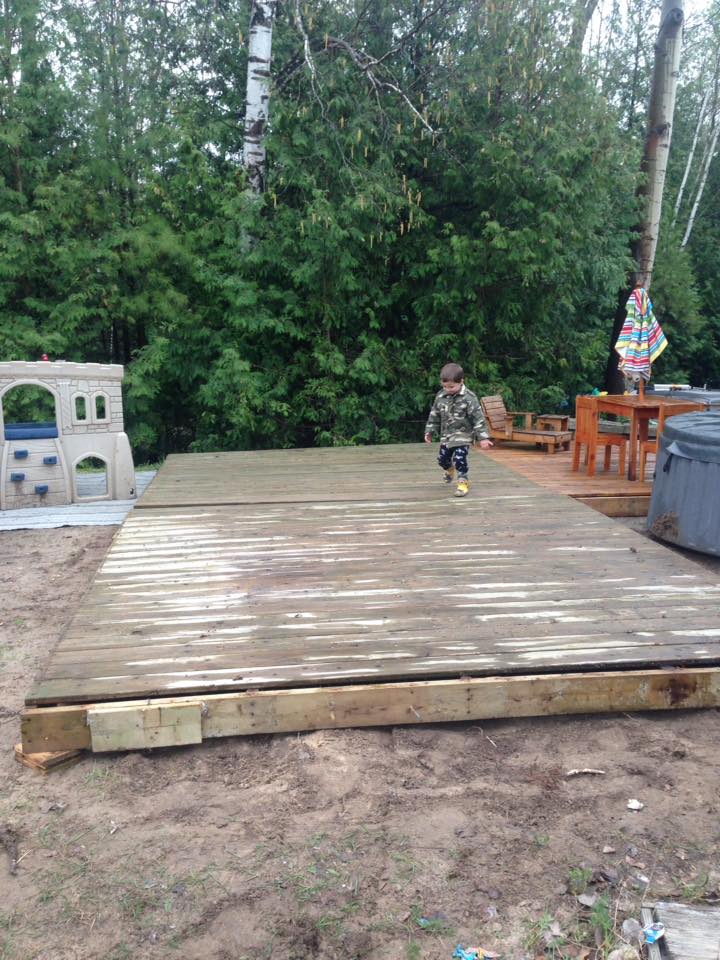